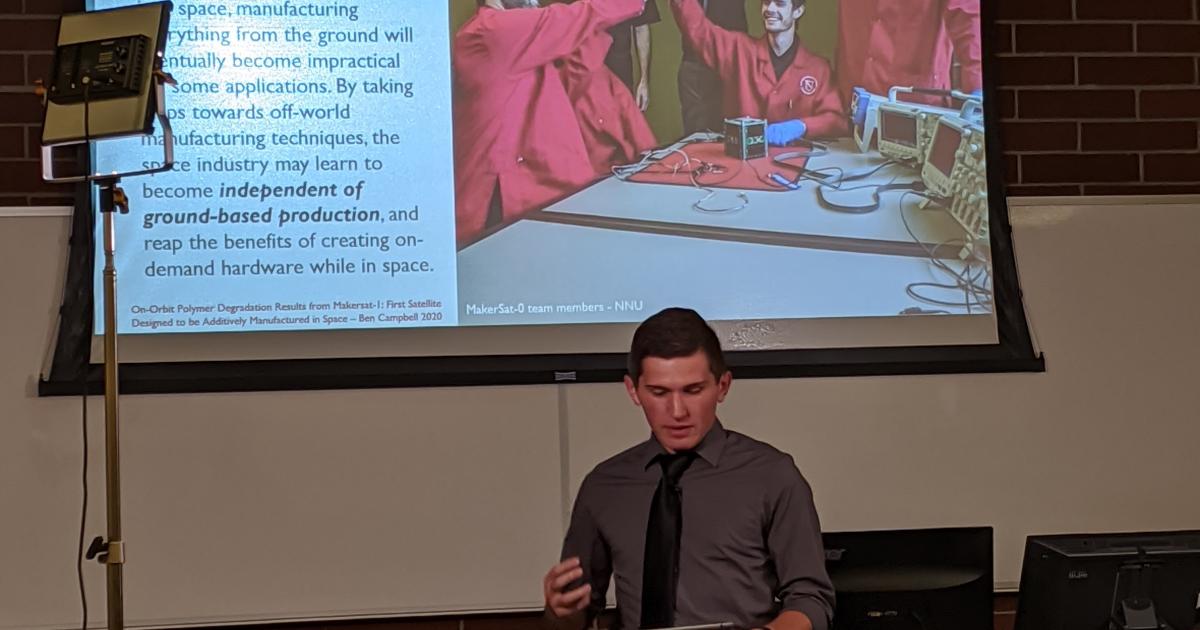 In February, the NNU Engineering  MakerSat-1 was deployed into orbit around the earth. The satellite was NNU’s third, to be built by students and sent into earth orbit by NASA.

In August, Senior Engineering student Ben Campbell will provide highlights of the scientific data received after the deployment of MakerSat-1 while presenting at the 34th Annual Small Satellite Conference. The SmallSat Conference will take place remotely from August 1-6. Livestream will be available for free at smallsat.org.

Dr. Stephen Parke, MakerSat-1 faculty researcher, says the conference is one of the biggest aerospace conferences in the world and draws an international audience. Previously, students Braden Grim and Connor Nogales have represented NNU at the conference presenting on earlier MakerSats in 2016 and 2018, respectively.

"I am very proud of the persistence and hard work of our NNU MakerSat student team over the past six years of work,” Dr. Parke said. “To see the project through to successful completion and international publication is no small feat. Ben and the team sets the example for future NNU engineering student design teams to reach for the stars."

“In the future, if humanity continues to extend its reach into space, manufacturing everything from the ground will become impractical. By taking steps towards off-world manufacturing, the space industry may learn to become independent of ground-based production and reap the benefits of creating on-demand hardware while in space,” Campbell said.

The opportunity for undergraduate students to work collaboratively on a research project such as this is rare. However, every year for the past decade, NNU undergraduate students and their professors have launched a science project into space. And recently, NASA awarded another grant to NNU for the coming four years.

“This was 100 percent a massive team effort. Everybody gave an intense amount of work into this project and each one of them should be recognized for their amazing work and getting it off the ground,” Campbell said. “We are hopeful for the future for orbital manufacturing to not just be a single research project like what was done here but to help it spread to be a common thing that helps to make space accessible to anyone who wants to be involved in it.”

Research projects, like the MakerSat-1 project, have been funded by NNU, NASA, Idaho Space Grant Consortium, and several Idaho companies like Plexus, Micron, and American Semiconductor. More than 50 NNU students and several local high school students have jump-started their engineering careers through participating in these team projects.