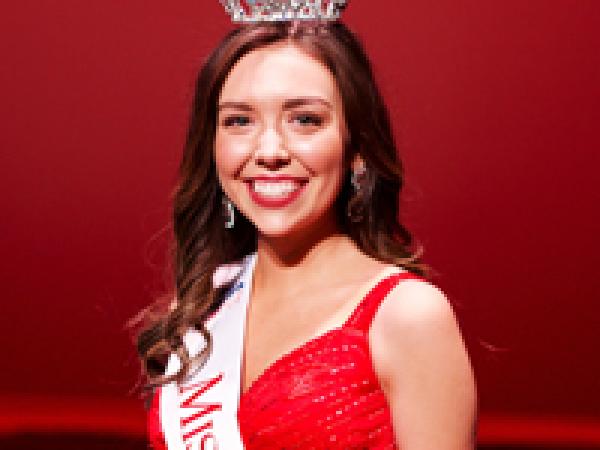 Senior public relations major Madison Treyz was recently crowned with the title of Miss Boise. Originally from Puyallup, Washington, Maddy started pageants at age 17 in a teen program. She never had any interest in pageants growing up, but was convinced by a friend to compete on a whim and quickly fell in love with it.

Maddy took a break from pageants after arriving at NNU, but started again last December. She competed for Miss Eagle and won, which then lead to competing for Miss Idaho in June 2016, where she placed in the Top 10. On Saturday, February 4, Maddy competed against eight other women and won the title of Miss Boise. She will be going back to Miss Idaho again in June 2017.

In the pageant, talent is worth the most, counting for 35 percent of each contestant’s final score. Maddy’s talent is tap dancing, which she has been doing since she was a little girl. Each participant has a private interview with the judges that is worth 25 percent The evening gown competition is worth 20 percent, the swimsuit 15 percent, and the on-stage question is worth 5 percent.

Along with the pageant categories, each girl also promotes a personal platform which they are passionate about. In the summer of 2015, Maddy’s cousin was diagnosed with Ewing’s Sarcoma bone cancer, which is what started her personal platform of inspiring action to fight children's cancer. A lot of her time as Miss Boise will be spent volunteering at St. Luke’s Children’s Hospital. She set a goal to raise $10,000 during her time as Miss Boise and plans to encourage and inspire others to make a difference in these kids’ lives.

“Hospital stays can be long and exhausting, and it is my hope that through my visits I can bring joy to the patients during a rough time in their lives. Whether it is through talking, laughing, playing or just listening, I want them to forget why they are there, even if it is just for a short amount of time,” Maddy said.

Maddy accounts a lot of her successes to being a student at NNU. “Being a public relations major I’ve learned public speaking skills that make me stand out and I’m more confident to answer questions on the spot. The community at NNU has also been a big part of it; I had a good support system going in,” she said.

In June, Maddy will take the stage in competition for Miss Idaho, which could eventually lead to Miss America. Her title lasts one year, and from now until then she will carry out her platform for children’s cancer, be a spokesperson for the Miss America Organization in the Boise area, and graduate from NNU in May. After graduation, Maddy plans to start applying for marketing and public relations jobs. She hopes that her time and experience as Miss Boise will lead to job opportunities in her field.

Congratulations, Maddy! We’ll be cheering you on in your efforts as Miss Boise and as you compete later this year.