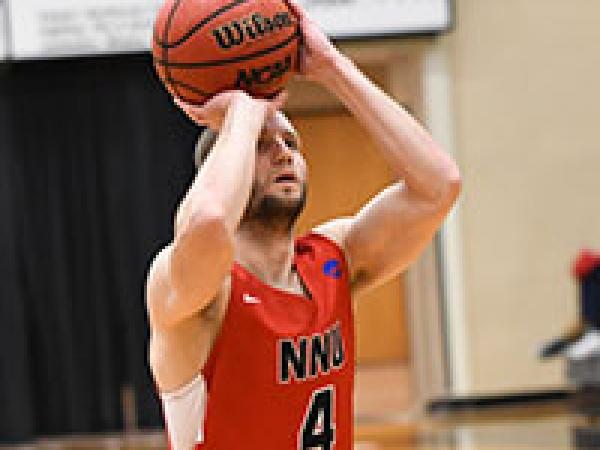 Basketball brought Nikola Prvulj to Northwest Nazarene University. Community is why he is still here.

The 2019 graduate came to Nampa, Idaho, sight unseen, from his native Serbia. He left behind a cycle of violence and quickly embraced a campus full of love.

“In Serbia, people are angry and everyone leads separate lives,” Prvulj said. “Naturally we are a violent people. We are aggressive. We sound aggressive. We speak aggressive. So, it was completely weird when I came here and [everyone was] so nice. Everyone is so polite.”

Prvulj played four years for the Nighthawks basketball team and graduated with a double major in Marketing and Accounting. He is now helping run a company with Brian Bohner, a 2000 graduate.

Bohner, along with his wife Nichole (’96), has donated nearly $350,000 to their alma mater through gifts and in-kind giving through their company—PC Maintenance. They give to NNU because of stories like Prvulj’s.

“Nichole and I have focused our efforts and intentions on giving to sports and education with a Christian emphasis,” he said. “Those are two things we really believe in. We want that for our children and [for] everyone’s children.”

To understand the Bohners’ dedication to NNU and her students, you must first go back to the 1940s on a Minnesota farm.

Brian’s father, Tony—along with his mother—emigrated from England as a small child. Tony’s mother married Sam Bohner, and they raised Tony together in small-town Minnesota.

Tony didn’t have the easiest life growing up and the only thing his dad would let him do outside of work was go to church. A track and field athlete, Tony eventually was told about Northwest Nazarene University by his youth pastor.

After graduating high school, the elder Bohner moved to Nampa sight-unseen, much like Prvulj, helping change the course of his family’s history as well as the lives of countless NNU student-athletes.

“He didn’t have the best of childhoods,” said Brian of his dad, who passed away in 2018. “It was pretty tough, not that that was ever shown to me, and I think that is because of NNU. All the love and passion he had, he poured into us, and we just try to carry it on and hopefully our children too. “NNU changed our family.”

Prvulj played basketball his entire life. In Serbia, he played professionally and rarely went to high school. After a brief stint in Spain, he decided to come to the U.S. to try and play NCAA Division I basketball. Because of his lack of schooling, he traveled to Georgia hoping to attend a prep school to better his chances of a scholarship.

The only problem? The prep school was a scam and didn’t exist.

“I had an apartment where there were 30 people in it,” he said. “We didn’t have WiFi or food or anything. I would go to the Starbucks and use the free WiFi to teach myself English.”

He earned money by going door to door and offering to do yard work. He lived on $150 a month, which covered food and an LA Fitness membership to stay in shape. He eventually went back to Serbia and figured his basketball days were over.

Scott Flemming, the NNU basketball coach at the time, had seen some tape of Prvulj. He emailed the Serbian and soon Prvulj was on a plane to Boise, Idaho. He had an instant impact on the basketball team as a freshman, starting eight games and averaging 5.7 points.

But as he got into classes he realized the biggest benefit of NNU was not the basketball court, but the free education he was receiving. “If you just play basketball and that’s it, why are you going to school?” he said. “There is so much opportunity that the school is providing you with. You know how many people would kill for the opportunity in the United States? A free education and no student loan when you finish?”

He took full advantage of his scholarships. He earned GNAC all-academic honors twice for basketball and took 18 credits each semester his junior and senior years.

“I set a goal that I want to be successful in life, but I also want to help NNU continue making successful people,” Prvulj said. “I didn’t become successful by myself. I had huge support from the community. I worked hard, of course, but if it wasn’t for the community I wouldn’t have succeeded. I’m really grateful for that.”

He also earned the Gorden Olsen Outstanding Business Student award given to the student by vote of the business faculty on the criteria of being the senior business major most likely to succeed. In addition, he was a part of two groups sent by NNU to represent the College of Business at Seattle Pacific’s Social Venture Competition.

“Nikola came to NNU with minimal English and worked exceedingly hard to succeed,” said Marketing Department Chair Dr. Konya Weber. “Nikola capitalized on his opportunity to study at NNU and would seek out professors to ask questions and discuss related topics. He prioritized his academic pursuit to gain valuable knowledge to be successful as an entrepreneur. I was truly blessed to be part of Niko’s educational experience at NNU’s College of Business.”

The Bohners have made an effort to hire NNU students and graduates over the years, employing a handful of former athletes. They have helped their employees finish bachelor’s degrees and get their master’s at NNU as well.

And while neither Brian nor Nichole played sports at NNU, they are passionate about teamwork and athletics. “When you are no longer an athlete and that moment is over, there is that transition into, ‘Who am I?’” Brian said. “If I’m not known for my times in the paper or winning the big game or the state championships then there is that moment of [questioning].

“When NNU student-athletes are in self-doubt, they know who to seek that answer from. It’s not from friends or family or anyone else. They need to hit their knees and pray.”

The Bohners investment in student-athletes makes a difference.

“They clearly understand and believe that athletics at NNU can transform lives and impact student-athletes in eternal ways,” said Kelli Lindley, NNU athletic director. “It’s pretty amazing that even though they are both relatively young and don’t know what the future may hold, they still give in huge ways with unwavering faith that God will bless their altruism.”

Part of the reason for the Bohners’ unwavering support of their alma mater is because of the impact it had not only on connecting them as husband and wife, but also with the success of their business.

“We wouldn’t have what we have without NNU,” Bohner said. “My father did a good job of surrounding us with Christian mentors. Everything about our success was NNU. It is a big part of who we are.”

Because of those deep connections, the Bohners are seasonticket holders, members of the Nighthawks Athletic Association, on the Foundation Board and help out however they can.

“It is improving the school and it is the place we love,” Nichole said. “We met there and we have a lot of ties there. We know a lot of people in the Nazarene community and it has impacted them and their kids.”

NNU and the Bohners have impacted plenty of students along the way, including Prvulj, by providing him with jobs that kept his family afloat financially while he was in school and partnering with him to purchase the cleaning company this summer.

“NNU means a lot to me,” Pruvlj said. “That I want to stay in this community is telling a lot. The lifestyle is different. Everything is different from where I came from. I came here and appreciated NNU so much that I stayed here and I have a moral obligation to make something in my life and return it to NNU.”