Eyes to see, ears to hear

Eyes to see, ears to hear 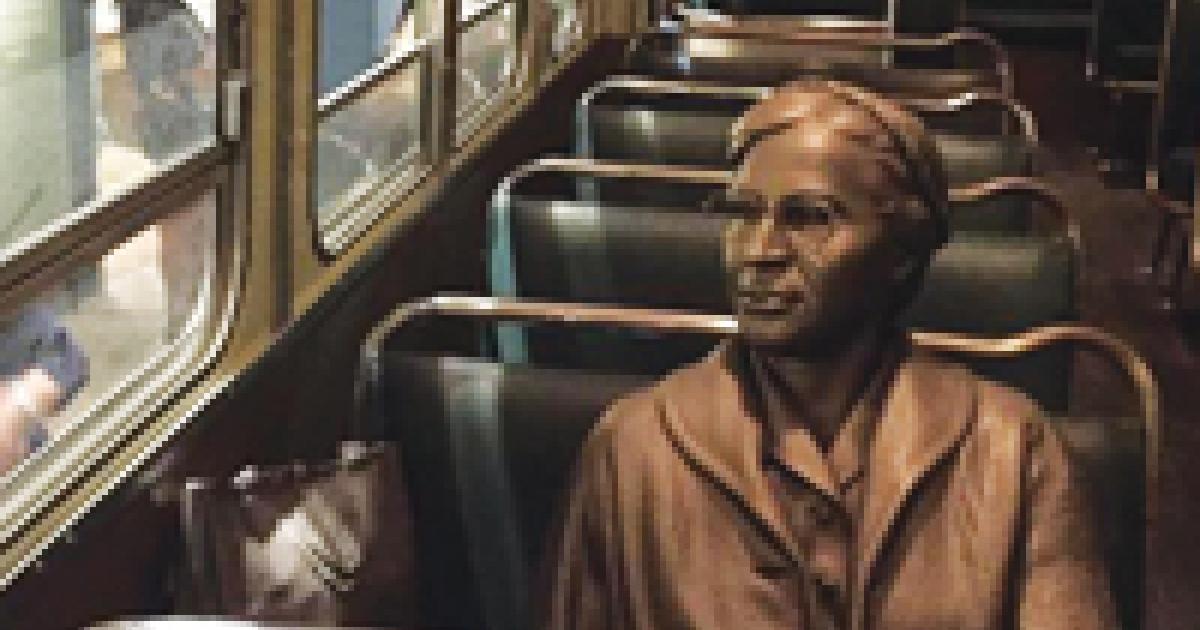 It was afternoon, and the sun was high as we walked slowly across the Edmund Pettus Bridge in Selma, Alabama. It was hot and humid, and we were thirsty. The Alabama River was below us, steadily rolling down toward the Gulf of Mexico. By the time we found ourselves here, we had already logged over 1000 miles of driving. We felt like we had experienced a thousand degrees of sorrow and wonder too. Walking with me were my husband, Dustin (’99); our sons, Andrew and Ethan (ages 15 and 11); and my parents, Randy (’73) and Robbie (’76) Craker.

Why were we there? What kind of journey was this? The only way I can explain it is to say we felt like we had to be there. Not only did we want to see states we hadn’t seen, visit museums and historical sites we had only heard of and eat foods we’d never tried, we also wanted to pursue a growing passion for understanding people who’ve lived lives very different from our own—people whose experiences still haunt our culture. So this past summer, we drove through 13 different states, logging over 2500 miles on what we lovingly called our “Civil Rights Pilgrimage.”

"We wanted to pursue a growing passion for understanding people who’ve lived lives very different from our own."

To prepare for our journey, we watched the movie “Selma.” When it was over, Ethan said to me, “I had to plug my ears and cover my eyes when they were on the bridge, Mom.” I wrapped my arms around his shoulders, kissed the top of his head and said, “It is horrifying what people are willing to do to one another, isn’t it?” And there we were, on the very bridge where peaceful protestors had been brutally beaten, and the event had been televised on what has been named “Bloody Sunday.” What took place there helped to open the eyes of our nation and force many finally to hear the cries of the oppressed.

I think the best way for me to tell you about this trip is to invite you to six of the places we stopped along the way. Maybe as you read you will catch a glimpse of what we saw, hear a little bit of what we heard and feel, in some small measure, what we felt.

INDIANAPOLIS, INDIANA—LANDMARK FOR PEACE MEMORIAL
In an ordinary park in Indianapolis stands a monument of Martin Luther King, Jr. and Senator Robert F. Kennedy reaching their hands out to one another across the pathway below. In this park in 1968, Kennedy spoke to a crowd on the night of King’s assassination.

As we got ready for our trip, we knew we didn’t just want to see things and read placards, but we wanted history to come alive for us. Dustin found the speech on YouTube and played it on his phone. I knew then that although we were going to want to shut all of this out—to silence the recordings and turn our eyes from the images—we needed to be wide-eyed, careful listeners, for God wanted to teach our family something.

MEMPHIS, TENNESSEE—NATIONAL CIVIL RIGHTS MUSEUM
If you have any desire to explore the Civil Rights Movement, the museum in Memphis is the place to go. We spent hours walking through the exhibits that begin with the devastating slave trade and move all the way to the present issues our nation faces. The museum is actually built on to The Lorraine Hotel where King was assassinated. I had seen pictures of that balcony, the friends pointing in the direction of the shooter and the wreath that was hung there. It was powerful to see it firsthand.

One of the most important things about this journey for our family was to talk about what we were seeing. Around the dinner table, eating BBQ, we talked about the inherent worth of all people, regardless of skin color. While eating ice cream and walking down the sidewalk, we talked about why King had come to Memphis to help the sanitation workers. While driving through beautiful countryside, we shared how the stories we were learning both inspired and horrified us.

NEW ORLEANS, LOUISIANA—WILLIAM FRANTZ ELEMENTARY SCHOOL
We stayed in a quirky shotgun house in an old neighborhood in New Orleans. One could hear the church bells ringing down the street and see kids riding their bikes to the library tucked under the ancient oak trees dripping with moss. We rode the ferry into the city for the two days we were there, took a swamp cruise, visited the incredible National WWII museum, ate gumbo and beignets and visited the cemeteries. One day we wandered around a neighborhood looking for a school.

We sat down on the stoop of the school Ruby Bridges, a six-year-old girl, had desegregated in 1960. She had walked up those steps amidst the screams and threats of white parents and children. We talked about how hatred had led every family to withdraw their kids and how Ruby was alone in her class. We told our boys the stories of Christians who had stood beside Ruby and eventually brought their kids back to school there. Then we turned our attention again to a video. With our backs leaned against the huge school doors, we listened to Ruby Bridges’ psychologist, Dr. Robert Coles, ask Ruby why she prayed every morning and every night for those who were threatening her. She replied, “Well, don’t you think they need praying for?”

MERIDIAN, MISSISSIPPI—JAMES CHANEY’S GRAVE
Fitkins Memorial Church of the Nazarene has been pastored by Dr. Charles Johnson for 56 years. We made sure to see that church because one of the ways we prepared for our pilgrimage was to read the book “Called to the Fire” by Chet Bush. It’s the story of Dr. Johnson, an African-American pastor, who moved to Mississippi at the height of Jim Crow laws and the Civil Rights Movement. Reading about his obedience and trust in God was inspiring. Because he actively sought justice and reconciliation in his community, no one there was surprised to see Johnson stand as a key witness in what has come to be known as the “Mississippi Burning” trial.

Winding through the back roads of Mississippi, we drove into what appeared to be a deserted lane, far off the beaten path, and came to a small church cemetery tucked into the woods. James Chaney’s grave is there. It has been defaced and knocked over so many times that recently steel supports were welded together and attached to his headstone so it can’t be damaged anymore. We had more questions running through our minds as we stood there than answers. Why would the grave still be defaced? What makes people hate one another so much? Why can’t we see each other the way God sees us? Why do we resort to violence so easily? Dustin remarked how sad it is that, after all these years, there still is no peace.

BIRMINGHAM, ALABAMA—16TH STREET BAPTIST CHURCH
It was baptism Sunday when we visited this church where the KKK had used dynamite to kill four girls and injure 22 others in 1963. The choir rocked back and forth, the matriarch of the church danced up and down the aisles and the congregation called out to the preacher while he opened the scriptures.

We love to visit other churches when we are on vacation. These visits remind us how we are all one in Christ. As we sat there, three generations of family, it was a beautiful reminder of God’s grace in our lives and the grace in that very place. We talked together about how God can make something beautiful out of the literal ashes of our lives—God doesn’t cause our pain, but God can redeem it. Having my parents along for this adventure made it even more meaningful for us. To have them telling our boys what it was like to grow up during the Civil Rights movement, to hear them talk about their own family experiences during that time, and to witness the depth of emotion they still carried from the things they had seen, made the historical locations all the more real.

MONTGOMERY, ALABAMA—EQUAL JUSTICE INITIATIVE, LYNCHING EXHIBIT
I think I knew this stop would be a difficult one, but I wasn’t prepared for how overwhelming it was. Who would have known that a wall of shelves covered with jars of dirt could cause someone to cry? But the moment I walked through the door, the tears began to stream down my face. I wasn’t the only one; there were tears in all of our eyes. This wasn’t just a sampling of Alabama soil; it was dirt collected at the locations of lynchings across the state. We were standing on holy ground, sacred ground. We were in a cemetery of sorts.

The exhibit was created to remember people whom history has tried to forget. On each jar is the name, the date of death and the town where the lynching took place. In some cases, there are multiple jars with the same colored dirt in them—on that day, in that town, many people’s lives were violently taken from them.

Although it can be easier to cover up the dark chapters of our history rather than face them, to do that diminishes those who have suffered and makes it even easier for us to repeat the sin of the past. Scripture reminds us over and over again that we are people who need to remember. When we are willing to remember, we open up space in our hearts to experience healing—but it isn’t just personal. When we remember, we invite God to heal the collective hurts and sin of our nation.

This summer we sat in Ebenezer Baptist Church and stood in the hangars of the Tuskegee Airfield, we celebrated the life and accomplishments of George Washington Carver and visited plantations, we saw baseball in Atlanta and John Wesley Square in Savannah. Along the way, we tried new food and visited new sites, we laughed and we cried, and we were forever changed. That’s the point of a pilgrimage—it is a sacred journey with the hope that you will encounter God along the way. We came home with our eyes uncovered and our ears wide open. Across the miles, we asked ourselves, “God, what do you want us to do in light of what we have seen and heard?” We are still learning the answers to this question. One thing we do know is that we can’t plug our ears or close our eyes anymore. Our prayer is that, by God’s grace, we will live different lives because of this journey.

Olivia is co-director of the Office of Spiritual Formation and co-chaplain, sharing these positions with her husband, Dustin. This year, the Metcalfs have been challenging and encouraging the campus community to live out their faith with compassion, passion and compass, a chapel theme inspired by their family pilgrimage.