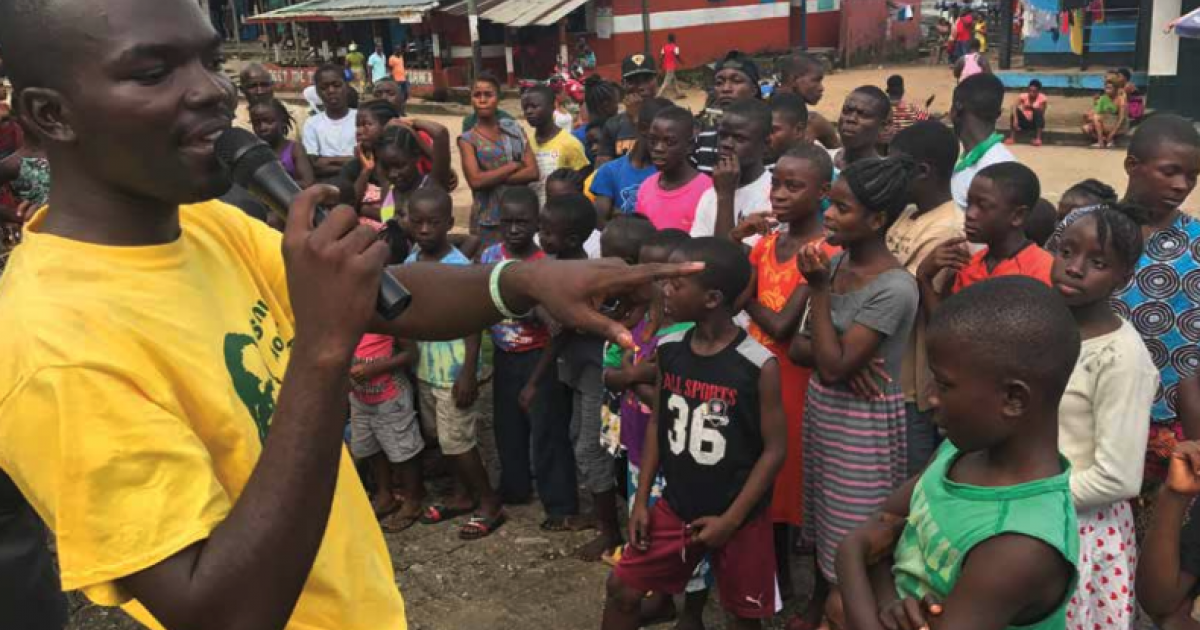 There were many 2020 NNU graduates who were unable to return to the Boise Valley for the rescheduled commencement ceremony held on Labor Day weekend. But for one student, Thomas Ofori Agyei, there was never any plan to travel that far. That’s because Agyei obtained his Master of Education degree while living in Liberia. Despite never stepping foot on campus, Agyei became connected to the university when his path crossed with NNU professors. They heard his story, and after working with him, encouraged him to pursue his graduate degree with NNU.

“Thomas is an amazing young man,” Eric Keller, education and global outreach professor, said. “Most of us would see the circumstances in which he is living as an impossible situation. Survival would be our priority, but Thomas has gone beyond survival and sees hope for his nation.”

Thomas Ofori Agyei is the fifth of six children born to Eugene Agyei Atakora and the late Agnes Amankwa Agyei. He was born in the rural area of Bepong in Ghana before migrating to Accra, the capital of Ghana.

“We resided in five different communities until I left home,” Agyei said. “Living in Accra from age 10 was a fulfilled dream. The place looked beautiful compared to Bepong—my hometown.”

Agyei grew up in an area where he was in constant contact with people from different backgrounds. He says he enjoyed learning about different cultures. When he was 15-years-old he found himself being drawn to Christ while attending youth camp meetings at the Presbyterian Church of Ghana.

“I found myself deeply involved in what has to do with the Bible and church activities,” he said.

Eventually, he would go on to college, earning his degree in agriculture at Kwame Nkrumah University of Science and Technology. Following the completion of his degree and required national service in 2016, he decided to move to Liberia to teach.

“A decision friends and family have never embraced, but [I] know it’s divine,” Agyei said.

In 2016, Agyei met Gary Friesen, executive director for Innovation Education International (IEI). That partnership would ultimately lead him to NNU. Friesen and the IEI director approved his volunteer service in the Samuel Morris Scholars Program. Two years later he would meet Dr. Kellerer and Friesen when they went to Liberia. Agyei was hired at IEI in 2017, but less than a year later he informed them he would be moving to China to pursue a master’s degree. That’s when Friesen stepped in and suggested he pursue the online M.Ed. in Curriculum, Instruction and Innovation at NNU.

“I began reading about NNU,” Agyei said. “I liked how simple and detailed information on NNU’s websites looked. Fortunately, I got admission and enrolled in NNU on January 14, 2019. Gary and Eric helped in many ways. Getting financial aid, receiving handheld recommended books a semester ahead for future courses are a few of the roles they played. Calling them bosses gives me joy.”

With a focus on high-quality instruction, instructor leadership, innovation, personal reflection, and research practices and applications, the M.Ed. in Curriculum, Instruction and Innovation equips graduates with the appropriate skill sets needed to access and effectively use technology and resources in today’s dynamic learning environments. The objective is to develop attitudes and practices that prepare educators to remain current and effective in an ever-changing world.

Agyei says he enjoyed learning from all of his professors but credits Dr. Amy Ackley, assistant professor of education, with being his mentor. He often struggled with power outages and unreliable internet connections. He says Ackley and his other professors took the time to help him get through the technology issues of completing the program online. In time he was able to gain a great deal from his courses.

“Everything Thomas learned, he immediately would go and implement, even when it meant pushing against barriers and the ‘status quo' of his country,” Ackley said.

Today, Agyei teaches Agriculture, Mathematics and Chemistry in grades seven through 12. He says earning his M.Ed. in Curriculum, Instruction and Innovation is a dream come true and is one step closer to him becoming a college professor, which is his ultimate goal.

“Thomas has been an incredible asset to our IEI team of nine nationals in southeastern Liberia,” Friesen said. “His love for Christ, humility, Spirit-filled character and competence have impacted every aspect of our program. In the eyes of the world, Thomas has given up much to leave his middle-class life in Ghana to follow God’s call to serve in this remote region of one of the poorest countries in the world.”