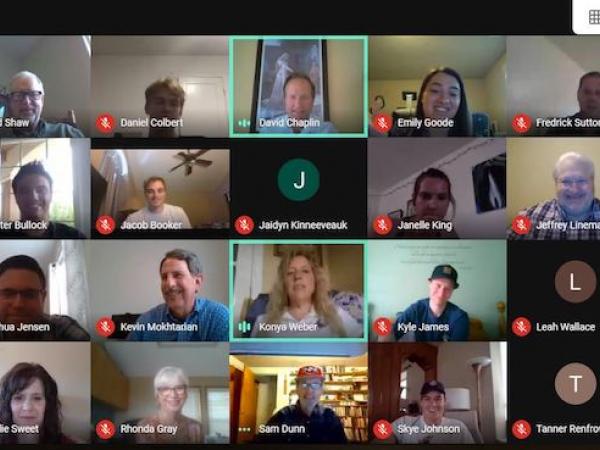 The College of Business faculty, staff and students had a chance to say goodbye to one another during two virtual gatherings. These online chats were hosted for both undergraduate students and the STEP and MBA students.

“As we look back on March and how things kind of happened, the world suddenly changed for all of us. We had to leave each other without much of a way to say goodbye,” Dr. Bill Russell, dean of the College of Business, said. “We just thought it would be a lot of fun to try and give us a chance to get together and chat and visit together.”

Students and professors shared highlights of the year as well as communicated thanks to one another for making the semester so meaningful.

MBA graduate Doug Cheney thanked Dr. Josh Jensen, director of graduate studies, for helping him as he went through a move amidst the closing of campus. He says he was worried he would fall behind, but that Jensen came alongside him to help build up his confidence so he could stay on track. He also thanked all of his professors for helping him reach his goal.

“Each one of the professors were very understanding and flexible and worked with me when I was behind and able to get caught up —I really appreciate the school,” Cheney said.

Senior Jacob Booker, a triple major in financial economics, philosophy and political science, said he’s had time to reflect on what he now values most since leaving campus.

“Part of what makes NNU what it is is the community, and being so far away it’s just so different. But it’s made me more appreciative of what it’s been —what the experience has been. And part of that is just going to classes and being around you guys and I miss that. I’m thankful for all the opportunities I’ve had with you” Booker said talking to the group.

The College of Business announced that it is planning to have its award ceremony in the fall when the graduating seniors return for the rescheduled Commencement ceremony over Labor Day weekend.