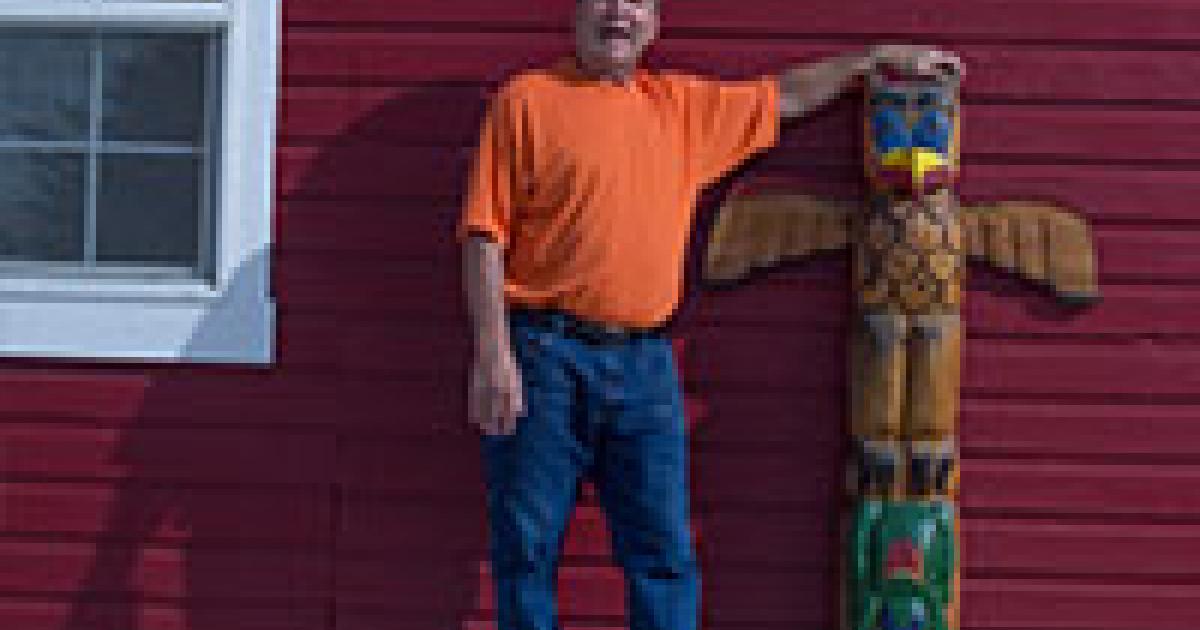 Roger Schmidt is a builder. He’s a builder of basketball teams, ballfields, students’ minds and the Kingdom of Christ. Take a stroll around the Northwest Nazarene University campus with the recently retired Schmidt, and the history just pours out of his mouth.

There is seemingly no place on campus that he has not had a hand in helping to improve. From building the old bleachers in the gymnasium to laying sod at the baseball field, building the track and field coaches’ offices, working on locker rooms and concession stands to sprucing up the old entryway to the gym—it seems there’s nothing his hands haven’t touched.

His handiwork can be seen from the President’s dining room to the Bookstore to the Career Center to the Registrar’s Office in the Administration Building. He’s tackled projects small and large, from the library book carts to Mangum Hall bunk beds to the metal shop to a complete renovation of the new Admissions Building to the lectern in Feltar Hall.

“I feel good about that,” he said. “I didn’t do anything spectacular that no one else did, but I feel like, to me, the gifts that God has given me are to be a problem solver and to have the vision to be able to see stuff and build stuff.”

Schmidt got his start in construction working for his dad, Donald, who owned a refrigeration, insulation and repair business. The family serviced everything from air conditioners in cars to Big Apple storage facilities. In school, Schmidt took a few woodworking classes and immediately fell in love with working with his hands.

“I still have a piece of furniture I built in ninth grade,” he said. “It’s a solid black walnut cabinet.”

Because Donald was good with metal, he taught Schmidt welding and cutting and enough about electronics to be dangerous.

“We weren’t poor, but we were lower middle class,” Schmidt said. “If we wanted something done, we had to figure it out.”

“He’s more talented than any human being I know,” former men’s basketball coach Ed Weidenbach said. “He’s very good at getting a project done. He is just such a humble spirit and a great guy. It was never about Roger; it was about what we can do to make this better. It was about being the best you can be.”

He worked diligently at being the best, whether on the basketball court or in the classroom or in his workshop. Schmidt led the 1996-97 women’s basketball team to the only team national title in school history. He was named the NAIA National Coach of the Year in 1997 and was elected into the school’s hall of fame in 2002. For many students and athletes, though, his impact off the court is what changed their lives.

“He took me in, knowing that I was a little rough around the edges,” former NNC star Staci Kirk Carter said. “He definitely was a game-changer for me. I was coming in to NNC kind of angry, and I needed him, and I needed the school to help create my path. And that is exactly what they did. He impacted hundreds, if not thousands, of kids. It goes beyond basketball, beyond school … he helped me in so many ways, and I’m so fortunate to know that man.”

Here are just a few ways Schmidt impacted the campus:

ALL HANDS ON DECK

Schmidt worked at NNU in an era when it was all hands on deck when it came to construction projects. It was a much different time than now with contractors, engineers and professional construction workers building the new Student Commons.

The 1974 NNC graduate remembers nearly all of the student-athletes and coaches helping lay the sod at the new baseball field in the early 1990s. Then assistant baseball coach Tim Onofrei marked where the field would go, and Schmidt hopped on a tractor to haul the sod pallets to the area. Students and coaches would then lay the grass. The field was completely planted in one afternoon. Laying sod was a common theme in Schmidt’s recollections. He remembers the men’s and women’s basketball teams beautifying the area along Dewey Street near the old entrance to the gym. He also remembers faculty work days laying grass around the outside edge of campus after the interior roads were removed.

“We’ve kind of gone from us doing it—the community of NNU—to hiring it out,” Schmidt said, “which is good, but sometimes I think we’ve lost some of our camaraderie and our identity.”

There was seemingly no project that Schmidt couldn’t tackle, whether it was for the school, for co-workers, for the church he attended or for the campgrounds he worked at. He worked before practice and after practice, before class and after class—a seemingly tireless worker.

“Just get it done. That is the phrase that comes to me when I think of Roger,” former president Richard Hagood said. “It was true with his basketball, which was terribly successful, but also what he did in the classroom and then the projects that needed to be done.”

Getting it done meant tunneling under a hallway in the gymnasium to connect plumbing to a room that would serve as the hospitality suite during the NAIA Division II National Tournament that the school hosted from 1993 to 1999.

It meant climbing an 80-foot tower and rappelling off in 95-degree heat after building the high rope course and getting certified in running it.

It meant doing projects even if there wasn’t explicit permission.

Schmidt, along with Assistant Athletic Director Craig Stensgaard, constructed the press box that sits above the student section in the gym for the national tournament. When the school got new bleachers, they had to figure out how to make the press box freestanding because being supported by the bleachers would void its warranty.

“We had to build some fairly stout wall mounts and we got it done before the people across campus could say we couldn’t do that,” he said.

PAINT IT RED (OR RUSSET ORANGE)

One of Schmidt’s favorite stories is about when the basketball programs helped the school change its primary color from orange to red. While I couldn’t verify exactly who decided that the old pumpkin orange was going to go away, legend has it that Schmidt, Weidenbach and Assistant Men’s Basketball Coach Rich Sanders helped begin the push.

Over a Christmas break one year, the coaches went down to the paint store and asked for a color that was red but had orange in its name. Russet Orange is what was decided on, and the teams went to work before and after practice repainting the bleachers in the gym with brushes and rollers. All without permission.

“We had them painting the backside of all the bleachers and all the benches too,” Sanders said. “It was good to get the kids involved in it.”

Roger believed in having athletes do work that would please the fans, to make a contribution to the school through ownership of the facilities.

“Instead of hiring out and paying thousands of dollars, Roger figured he can do anything,” Weidenbach said. “He fixed kids’ cars so they could get home, built houses, updated locker rooms and was really, really talented. Roger would just say, ‘I can do that’—and he would.”

WORKING BEHIND THE SCENES

Schmidt spent most of his years on campus in the Johnson Sports Center. From coaching to teaching kinesiology to athletic training, the gym was his domain.

When Sanders took over as sports information director, he was tasked with coming up with ways to raise money, so he and Schmidt decided to add advertising to the gym. Schmidt built all of the hanging light boxes with local companies’ logos adorning them. He built the scorer’s table, which also has advertising in it.

“Roger clearly loves NNU and has an undeniable passion for the care and maintenance of the athletics facilities,” Athletic Director Kelli Lindley said, “Over the years, many of us have witnessed Roger find hundreds of big and little ways he can improve the Johnson Sports Center or one of our outdoor facilities.“Whether it was repainting chipped paint, putting in a better light bulb, resetting a clock or building new lockers—Roger has always served NNU Athletics behind the scenes.”

Schmidt even has a connection with the American flag located on the north wall of the gymnasium.

“That was my dad’s flag,” he said. “They were looking for a flag, so I asked if I could put it up there. He died of Alzheimer’s and never saw me coach; he was never of sound mind when I was coaching. Maybe this is a way of saying, ‘he is watching.’”

Schmidt finally said goodbye to Northwest Nazarene University in the summer of 2018. Despite no longer being contractually employed by the school, he still is doing work for it.

“Even in his retirement, we are still asking Roger to construct a new scorer’s table,” Lindley said. “Not only is Roger an incredibly gifted builder, but we love having him around. Roger’s legacy of exceptional success and service as a coach, professor and friend is one that we all look up to.”

This school year alone, Schmidt built the new scorer’s table, added additional lockers to the men’s basketball locker room and is working on a trophy cabinet for the new part of the gym. His legacy on the NNU campus lives on even without his working here anymore.

“We are proud that he got to contribute to something that he valued greatly,” said Patti Schmidt, Roger’s wife, a 1978 graduate. “He believes in the mission and of giving of those other talents beyond the teaching and the coaching. It was important for him to share that.”

Important for Roger, his many students and athletes, and the campus itself.