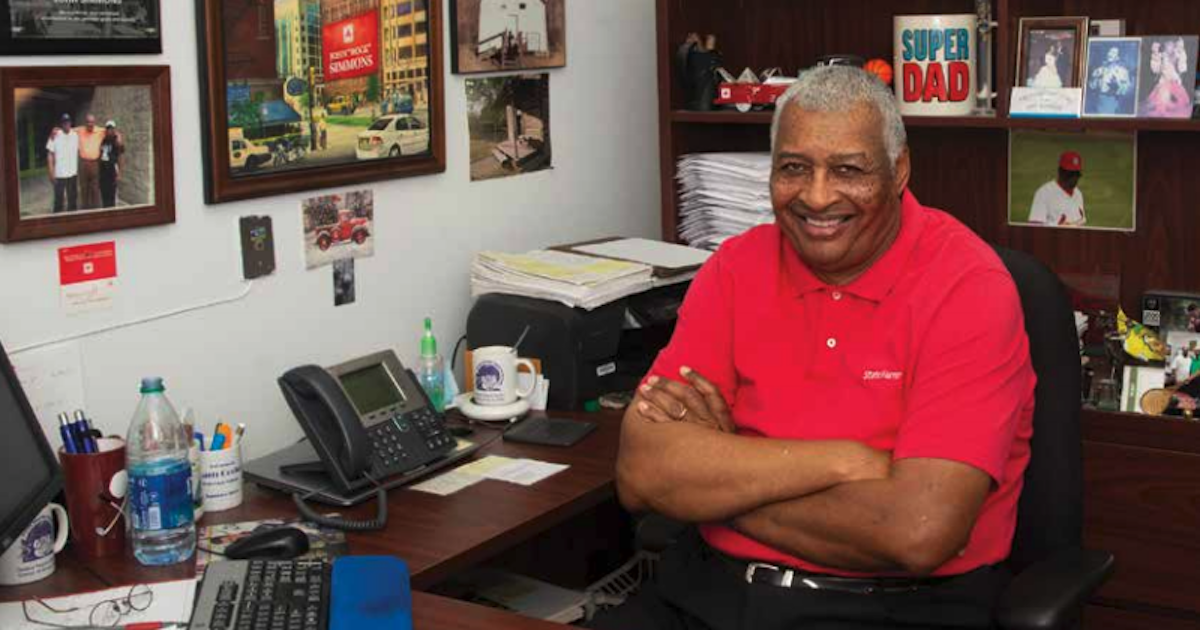 John “Rock” Simmons began picking cotton when he was 5 years old. Growing up on the Mississippi Delta in a family of sharecroppers, that was just the way of life.

For 12 years he picked cotton every summer. From sunrise to sunset, six days a week in the relentless heat and humidity of Mississippi, Simmons was bent at the waist in the fields picking and chopping cotton.

Come October when the mechanical picking machines would clean the last bits of the field and the work was done, Simmons said there was no better feeling in the world.

“I haven’t met a Christmas yet that could replace that feeling,” said Simmons, a 1970 Northwest Nazarene graduate. “You get off the school bus and look across the field, the meadow, the glen and there ain’t no cotton. Basketball season is starting. You can be with your friends. You can see your girlfriend.

“I haven’t hit a jump shot yet that could replace that feeling. I’ve never met anything like that.”

And Simmons has hit a lot of jump shots in his life.

He left Mississippi in 1965 and moved to St. Louis, where he played on an inner-city powerhouse basketball team. After high school, he went to Missouri Baptist College and then ended up at Northwest Nazarene College for his junior year in 1968.

Fifty years ago this summer, Simmons walked across the graduation stage in Nampa, Idaho, becoming the first African-American men’s basketball player to do so as he completed a journey he wasn’t sure was possible when he was filling bags with cotton in the Jim Crow South.

“[Northwest Nazarene] was the place that made me look inward,” he said. “If I had gone to Mississippi Valley State, I would’ve stayed empty and I wouldn’t be the person I am today. My consciousness and my politics wouldn’t be what they are today.”

The first basketball hoop Simmons ever had was built by the plantation’s Black mechanic in 1955 in Ruleville.

The Simmons family had moved from Dockery Farm Plantation, the birthplace of the Blues, when Rock was an infant to the hometown of Fannie Lou Hamer, a famous Civil Rights advocate who was beaten for trying to register to vote.

They lived in a shotgun house with no running water, and basketball proved to be an outlet for Simmons and his two brothers. When they weren’t picking cotton, they could often be found playing basketball.

Because of the segregated schools, Simmons never got the chance to play the legendary Archie Manning, who attended a nearby high school. Despite that fact, basketball was an avenue to college for all three of the Simmons brothers and left Rock dreaming of being Elgin Baylor. If the NBA didn’t work out, he wanted to be a teacher and a coach.

“My dream was certainly playing college ball,” Simmons said, “and to be just like my coach, who played for Alcorn State. He was drafted [into the military], went to Germany, came home and got a 1960 yellow Impala that was the prettiest car in town. I wanted to be a school teacher and a coach just like him.” Although he didn’t follow his coach’s footsteps exactly, he did in spirit. Simmons went on to have successful careers working in the juvenile court system, at the Red Cross and as a State Farm agent.

A run-in with the plantation mechanic led to Simmons moving north to St. Louis, which set him on his path to Idaho. While out running errands one summer afternoon, Simmons came upon a German shepherd in the middle of the road. It wouldn’t move and he drove near it until it finally got up and left the road. The dog was owned by the plantation owner. The Black mechanic, who didn’t sharecrop and drove a plantation truck, ran out of the shop and yelled that Rock better not run over the dog.

After Simmons finished his errand he came back and confronted the mechanic and said something nasty to him about defending a German shepherd over him. The high school junior returned home and told his mom, who said she was sending him to live with relatives in St. Louis.

“I tried to talk her out of it, but she made me get on a Greyhound bus,” he said. “My mother had had a bad experience with this guy previously. After a month or two, my mother said, ‘forget this stuff, I’m leaving as well.’ That is how the balance of my family ended up in St. Louis.”

Simmons played his senior season for Vashon High and planned to follow his older brother to Mississippi Valley State, but a coaching change left him with nowhere to go.

He went to Missouri Baptist, a local junior college. His sophomore year they advanced to the national tournament and lost to Boise Junior College.

He’s never confirmed if Northwest Nazarene coach Orrin Hills was at that game or if he heard about Simmons from that game, but Hills offered Simmons and two teammates scholarships to come to Nampa.

Simmons was the only one who came.

Simmons boarded a plane for the first time in the summer of 1968 and flew to Boise, Idaho. The distance from St. Louis was a main draw, as it gave his college choice a bit of cachet.

“I didn’t know anything about Idaho,” he said, “but what was attractive was that it was far away. That put some zip on it. To go away to school was a positive.”

He roomed with the first Black men’s basketball player in school history, Glenn Miller, who was in his second year at NNC. Miller had been a member of the freshman team the year before.

Simmons and Gary Lawson (’70), who Simmons credited for being extremely welcoming, shined for the Crusaders that season. Simmons averaged 14 points per game and the team finished 17-9 overall.

It was what happened off the court, though, that turned Simmons’ life around.

He had always identified basketball as the way his life mattered, but the mentoring of Dr. Bob Woodward, a pair of guest speakers and a new desire to start reading put basketball on the back burner.

“At the junior college I was a ballplayer,” he said. “I didn’t cut class, but I had no respect for academics. All the athletes at the schools that we played against in my conference in Mississippi and St. Louis, they were the popular kids. I saw no one stroking the kids that were smart, but that changed when I was out [in Idaho] when I picked up Malcolm X and Soul on Ice.”

Simmons helped organize the first memorial at NNC for Martin Luther King Jr., who was killed in the spring of 1968. He recruited a Black pastor from Boise to come speak at chapel and later a Black graduate student from Idaho State.

“That’s how you break the chain,” said Mark Clark, a 1970 graduate and close friend of Simmons. “Dr. Woodward told him he thought he could do better and (Simmons) had never had anyone outside of the world of sports say that to him. That is what turned him around and started him on the way.”

Woodward wasn’t sure what to make of Simmons initially, but during one of his 400-level history classes he found himself in the student’s corner.

“I saw him writing during class, a class he shouldn’t have been in,” Woodward said. “He was making a vocabulary list from my lectures. That turned me on to him. I was really for him after that.”

Simmons’ senior year was less about basketball and more about studying, reading and writing columns in the campus newspaper as he delved deeper into what was going on culturally and politically in the country at the time. Simmons was the lone Black student on campus from December to June of his senior year.

Woodward, who is now 94 and living in Boise with his wife Belle, said that Simmons worked hard to become a good student. When Simmons graduated, he asked Woodward to write a letter of recommendation for him to attend prestigious Washington University in St. Louis to pursue a Master of Social Work.

“I just told the truth,” Woodward said. “I told him how I saw him pulling himself up as best as he could. He got in and got his master’s degree.”

He knew he wanted to do something to help youth, so he went to a local police station and asked if they had any jobs that didn’t involve carrying a gun.

“The guy laughed at me and told me to go across the street and talk to the juvenile court people,” Simmons said. “I worked there for 10 years and went to WashU at the same time.”

He eventually left the juvenile court and joined a program called AID which helped victims of crimes. After two years, the grant money ran out and he moved on to the Red Cross. He supervised veteran services, enjoying advocating for people who had been forced out of the military.

Eventually, he ended up as a State Farm agent where he has spent the last 33 years.

In 1997, Simmons got remarried to Theresa. He also has three children: Patrick, Maceo and Holiday. His daughter is named after the singer Billie Holiday and his youngest son after a Cuban revolutionary, Antonio Maceo.

He credits his time at NNC as helping put him on a path to even know who Holiday and Maceo were.

“I would call it a pilgrimage,” he said. “It was almost like a religious journey when I got started. You start discovering stuff that you never paid any attention to. That is what I would wish to see these Black kids go through … to be proud of their achievements.”

Simmons’ pilgrimage started in the fields of Mississippi, wound through the humidity of St. Louis, stopped in the farmland of Idaho and ended up back in Missouri, helping as many people as possible along the way.