A place to lead

A place to lead 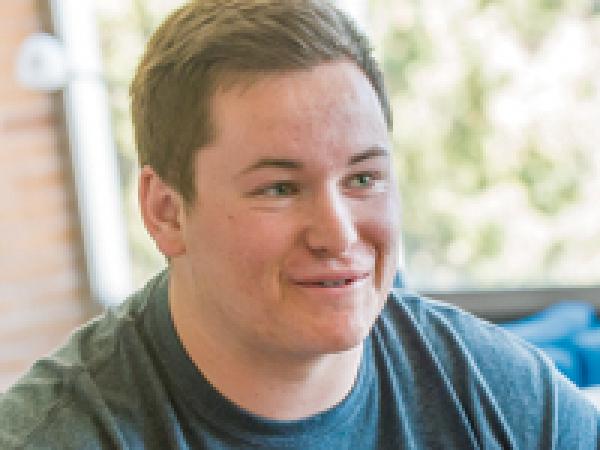 Ross Martinson knows a thing or two about student leadership. The Salem, Oregon, native came to NNU knowing there would be several opportunities to get involved, and he made the most of them right out of the gate. “I knew it was a place that I could jump in with both feet and get involved and try anything I wanted to and that people were going to encourage me in this environment.” After his freshman year, Ross was selected to be a resident assistant in Sutherland Hall, the sophomore men’s hall.

After an exciting year working in Sutherland, Ross felt drawn to run for student government. As a sophomore, he ran to serve as student body president for his junior year, and won. After a year serving as president, Ross ran for a rare second term and was re-elected to serve the student body his senior year. Through it all, he’s become intimately familiar with the work of the student government association (SGA) and its many connections with the NNU community. “It’s been incredible to see a bridge between the administration, the student body and the student government, and how we create culture within that [framework]. Then that just bleeds out into the rest of our campus.”

“I'm able to ... see NNU continue to grow and thrive and see other students experience the culture.”

As SGA president, Ross was charged with leading a team that deals with a number of student activities and initiatives, including social events, the yearbook, intramural sports and campus clubs. When reflecting on the kinds of events that first inspired him to get involved, he immediately thinks of Week One—the opening week of fall classes that has a different event every night.

“We set up a couple unique things the minute you come in … student government throws a big root beer festival, and we have a movie on the lawn. You get to meet anybody and everybody on campus, and it’s very integrated. Whether you live on or off campus, everyone comes and is excited.” With a grin he recalls, “There’s a bonfire at the end of the week that’s huge—it’s the biggest bonfire I’ve ever seen!”

One of Ross’ favorite parts about NNU’s student programming is how it intentionally integrates students into the life of the university. “You meet so many people that way, and you immediately feel like you’re part of a bigger picture and of a culture that has been passed down year after year to the current student body. Students and staff who have come before us have created that, and now we get to reap the benefits of being here and being in this environment.”

Within this environment, students find a place to belong. “There’s not a sense of freshmen, sophomores, juniors or seniors,” Ross says. “There’s a sense you are part of NNU, and we can all be friends. We can all see each other grow as we learn from each other.” As Ross looks forward to the future, he is excited about the ways NNU is growing and continuing to invest in the student experience. As a student, he was able to experience the Leah Peterson Learning Commons as soon as it was completed, and he witnessed how the fantastic facility helped foster community and excitement amongst the student body. Now, he looks forward to the potential impact that a new student center will have. “Knowing I’ll be graduating and not able to experience the new Student Commons is not something I’m disappointed about—it’s something I’m excited to see. I’m able to go away from here and see NNU continue to grow and thrive and see other students experience the culture.”

The plans for the new building include a central location for the SGA, meeting spaces for students and dedicated space for clubs to grow. Ross imagines it will be a space “where students are hanging out all the time, and student government offices will be at a more accessible level than they are now.” With an improved dining space and more functional layout, the new building has the potential to serve as a living room for the campus community.

Looking beyond graduation, Ross anticipates making the transition from student leader to committed alumnus, and he knows a big part of that role includes telling the story of his experiences at NNU. “I hear story after story after story of alumni who have gone out and done amazing things yet continue to want to come back to campus or give back to the university because it was such a big part of their lives. Creating this atmosphere and this environment, it’s a legacy we are able to pass down year after year and give to each student.”

As we release this latest edition of the Messenger, a host of generous supporters have already contributed or pledged $14.5 million of the $16.5 million needed to begin construction on the new Student Commons. We would like to break ground this fall, but we need all funding in hand or pledged before this can take place. Your support will help bridge the gap. Learn more and give online at nnu.edu/campaign.