A big win off the court

A big win off the court 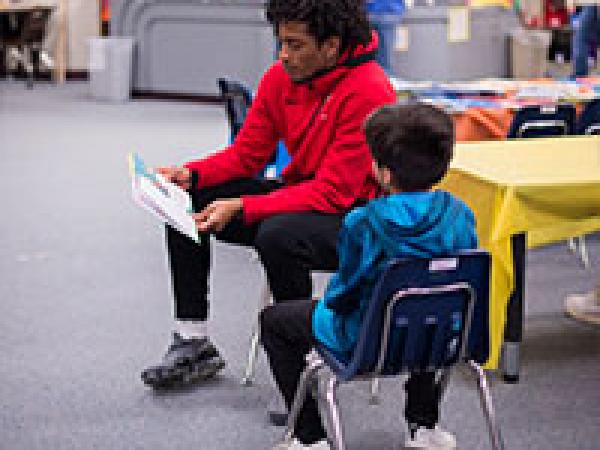 For the past few months, NNU freshman Cody Frazer has spent time between classes and practice mentoring and playing with a fourth-grade boy from Central Elementary School in Nampa.

At 11 a.m. on most Tuesday mornings, you can find Frazer and other NNU basketball players spending time with the kids or sitting alongside them in their classroom helping them with their school work. Since late October, the men’s basketball team has been making weekly visits to the school as part of a mentorship program initiated by coach Paul Rush. A snippet of their involvement with the school was recently featured on local media, when they read to students as part of “Read Across America.”

“We have a really unique demographic here at Central,” Stacy Freiburghaus, Central Elementary School counselor, said. “Low socioeconomic students, high homeless population and high population of students with one or both parents incarcerated ... so anybody, basically, that is a good mentor, that we can have work with these kids — it's great.”

Rush had a similar program for his high school students when he coached at Capital High in Boise. He talks a lot about loving one another and wanted to be able to give his team a chance to put those words to work.

While many of the active players are often traveling or studying during these visits, it’s common for the majority of the visits to be made by the team’s red shirts.

Skyview High graduate Cayden Wright was familiar with the elementary school having grown up in Nampa, but had no experience in mentoring.

“I like being able to go every week and hang out with them and love them and see the smiles on their faces and hang out in their classrooms — it’s awesome,” the freshman, said. “They’re good kids and their teachers do a really good job of loving on them. They’re just fun kids to be around.”

The players interact with all students, but Rush hopes to move toward one-on-one mentoring in the future. Right now, Frazer is the only player specifically linked with a student. A young boy named Isaiah.

“He kind of connected with Cody when Cody first got here,” Freiburghaus said.

In fact, during the NNU winter break, Isaiah became eager for Frazer’s return.

“Isaiah was really anxious for Cody to come back so he could see him,” Freiburghaus said.

But what is it about the 6-foot-4 freshman that made Isaiah connect with him?

“I don’t know why to be honest,” Frazer said. “When I first went I was just speaking to the kids and I guess he just chose me as his favorite.”

Much like Wright, Frazer didn’t have much experience with mentoring. And while he thought the program sounded interesting, he wasn’t sure what to expect. But now, he says he’s learned a lot from the experience.

“Hearing about the way they are growing up it helps me realize everybody is going through something different,” he said, “and to really treat everyone the same, not knowing how they grew up or what they’ve been through.”

Freiburghaus said she jumped at the chance to bring college students to the school to spend time with kids who may be struggling. And her hope is that the example the players set would be beneficial for the students.

“We want our kids to see that if you work hard you can go on beyond high school and be successful,” Freiburghaus said. “Our main hope is they could have hope that they can make it because they have seen these guys do it.”