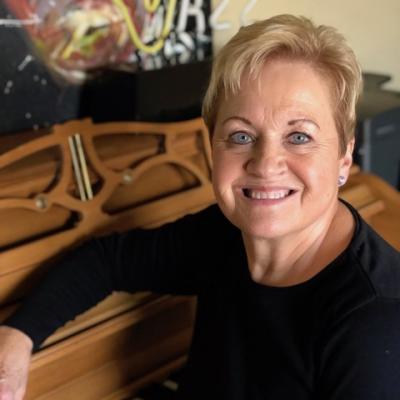 Affiliate Faculty, Voice
Linda Elliott Schmidt holds an MA and a BA from Boise State University. She also holds a degree in Educational Leadership, M.ED from the University of Idaho. Linda has been a voice instructor at NNU for 10 years.

Schmidt taught Choral Music at Capital High School for 21 years. Her experience in public school music also includes Jr. High and Middle School in Idaho and Oregon. She was Interim Head of School and Head of Choral Instruction at Arts West School for the Performing and Visual Arts in Eagle, Idaho and also Interim Director of Choral Activities at Boise State University. Linda also worked as an administrator in the Boise Independent School District, serving as an Assistant Principal and as a Music Consulting Teacher.

Schmidt’s concert groups and jazz choirs consistently won top honors throughout the Northwest. Both groups were selected to perform for state IMEA and northwest conventions, as well as feature performances at Disneyland, Victoria BC, Seattle, Portland and Salt Lake City. Under her direction, Capital Singers was mentioned in Downbeat Magazine as “Outstanding and Upcoming” vocal jazz ensemble. Schmidt is an active ACDA and NafME qualified adjudicator and clinician and has held several offices for ACDA and IMEA.

Schmidt performed with the Whitney Women’s Chorale and also as a soloist for many churches in the Boise area. She is currently a member of the New Modernaires vocal ensemble, with the Kings of Swing Big Band. She is the founder of an adult Jazz Choir, ‘Essential Jazz’, in which she directs and sings.

Mrs. Schmidt is married, and she and her husband, Jim, have a daughter, Adria, a son-in-law, Troy, and a granddaughter, Lola.
Email