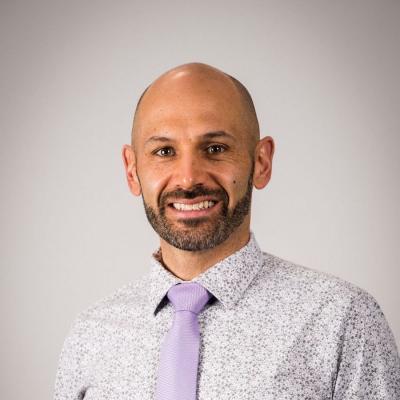 Director of Music Education/Instrumental Activities
John grew up in Southern California and received both his BA in Music Education and teaching credentials from Point Loma Nazarene University. Before graduating, he began his public music teaching career at Point Loma High School in San Diego. During his tenure there, John transformed a band of fewer than 30 students into a comprehensive music program, including multiple bands, choir, orchestra, music theory and dance. In 2008, John moved to Mira Mesa High School where he elevated an already prominent program of over 170 students to new heights, including high awards in marching and concert festivals. During this time, John completed his Master of Music from Sam Houston State University via American Band College. In 2011, he joined the music faculty at Point Loma Nazarene University as the Director of Bands and Music Education. There he directed concert and jazz ensembles and taught general education and music education courses. In 2020, John completed his Doctorate of Musical Arts in Music Education from Boston University. His dissertation focused on undergraduate music teacher preparation and field experience. During his time as an educator in San Diego, John served on the board for the California Music Education Association Southern Section for over 13 years, including VP, Band Rep and Collegiate Liaison. Additionally, he was a founding board member of the San Diego Winds, a professional wind ensemble with educational programs. He is also an active clinician, adjudicator and guest conductor.
Phone