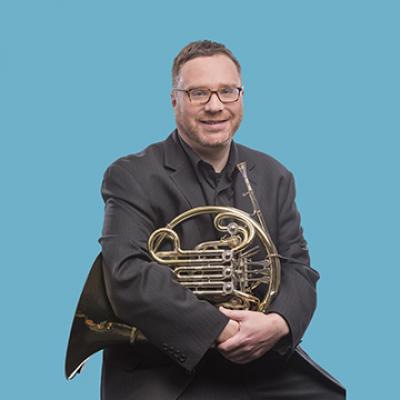 Affiliate Faculty, Horn
Brian Vance has been NNU's Horn Instructor since 2013. He has taught at the Michigan State Community Music School and the Interlochen Summer Music Festival. Previous high school students he taught have gone to study horn at prestigious universities and have been selected to the highest-level ensembles, such as All-State programs, All-Northwest ensembles and even All-National Orchestra.

Brian has been Principal Horn of the Boise Philharmonic since 2011, and before that, he was Co-Principal Horn of the Minnesota Opera Orchestra. He has been a member of the Lansing, Midland and Oakland Symphony Orchestras in Michigan and Assistant Principal Horn of the Mansfield Symphony in Ohio. Brian has played with professional orchestras throughout California, Washington, Minnesota, Michigan, Ohio, West Virginia and Pennsylvania, and abroad in China and Taiwan. He was a featured soloist with the Golden Stone Youth Orchestra in Changhua, Taiwan, Boise Baroque Orchestra and the Boise Philharmonic. He has toured in Germany, France, Italy and Austria with festival and student orchestras.

Originally from Rochester, NY, Brian received a bachelor's degree in French horn performance from the Cleveland Institute of Music. He received his Master of Music degree from the University of Akron and did doctoral work at Michigan State University. He has had the opportunity to learn under Richard King (Principal Horn, Cleveland Orchestra), Bill Hoyt, Janine Gaboury and Colleen Conway-Hodgman.